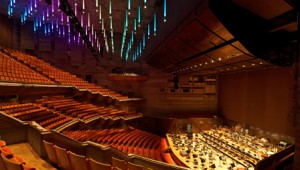 In July 2012, PSG completed an electrical and communications package as part of the Hamer Hall redevelopment. This concert venue was formerly known as Melbourne Concert Hall, renamed in honour of Sir Rupert Hamer, a former premier of Victoria who passed away in 2004. Working in conjunction with the head contractor Baulderstone, PSG delivered a multimillion dollar package comprised of a low voltage installation and communications and security works, the manufacture of switchboards, lighting control and CBUS configuration, and a high voltage upgrade.

Given the heritage status of the Hall, certain components of the building’s structure, as well as a number of old fittings and features, were retained. With the revised riverside access, all external lighting was redeveloped to suit the new layout. A new ‘feature’ LED lighting installation with the ability to change colour was utilised in the auditorium, positioned above the audience. A technical zone was also added above the acoustic panels of the stage from which all of the cable reelers, winches and other theatre equipment could be controlled. The wiring and theatre systems for all areas within the auditorium, including the stage and wing areas and all back of house, were also upgraded.

With a new and expanded foyer, improved amenities, increased disabled access, new auditorium seating, improved acoustics and state of the art staging systems and technology, Hamer Hall has definitely become a spectacular entertainment venue. Over its 2 year contractual period, the PSG team, led by Project Manager Terry Burke, were faced with and overcame many significant challenges, particularly in relation to the heritage nature of the project. However, this did not prevent the team from delivering the project on time and budget. PSG is proud to say that we played an integral role in the redevelopment of the magic that is Hamer Hall.